18 Jan Divorcing the Myth of Cosby

Posted at 15:07h in musings, People, Women by kcallyson

This is not a political blog. It is not a social commentary blog, although like everybody else I do have an opinion on everything – whether I know anything about it or not! That won’t change.

But it occurs to me that I have a little something to say about “this Cosby thing.” I’m sure it’s nothing that has not already been said, but so what? I haven’t read much of what others have written, just passively avoided acknowledging the truth until the testimonies started piling up to the point where… Well.

So, in my own words. It’s been sitting on my heart a long time.

I grew up in the era when Bill Cosby was the most iconic Black man in American media.

The first African-American to star on a major TV show (I Spy), over the course of the next several decades he re-defined white America’s idea of what it was to be a Black American man. (Seems funny now how proud we were of that. You see, we need “defining.” Some people are still working overtime to be understood.)

Cosby was funny, charming, and a talented actor. More to the point, for us anyway, he was well-educated, dignified, poised, and well behaved (in public. Previously we would not have had to qualify this.) He made us laugh without using curse words; so he was safe for the children to watch. We single ladies would have gone out with him in a heartbeat if he had asked!

Speaking of the children, he gave us Fat Albert and The Cosby Kids  and  The Cosby Show, and hosted Kids Say the Darndest Things. We would very probably have left our own children alone with him; and we didn’t leave them alone with anybody. Seriously. We loved and trusted him that much.

Now, you younger folks have to understand that this was also an era when men in the workplace were unrestrained in their attitudes toward women. Like our current President Elect, they  peeked, they grabbed, they schemed, they tried to get you drunk. They could never seem to get past you in a narrow passageway without touching. Especially your boss. (You’ve seen Mad Men!)

Women were new in the workforce. We were almost exclusively in low-paying administrative or service jobs. Translation: leverage could be applied. The phrase “sexual harassment” had not yet been coined. And there were always girls who “went along to get along.” (Because of the prevailing climate, this suspicion clung like a dirty shawl to any woman who did manage to advance.)

So when I heard about this Cosby thing, I rolled my eyes. Yeah, I thought. So what? They all did that. It was a creepy time. 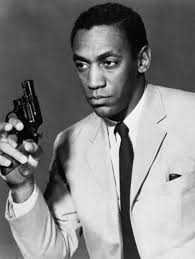 But of course that was now a couple years ago. And as the accusations have stacked up, any rational person has been forced to change their mind. While all male bosses in the 1980s – I’m sure it wasn’t all – tried to “get to you,” this element of drugging adds a special dimension of creepy. It’s not that we are surprised that a man habitually abused women in this way. We were not born yesterday. But we’re flabbergasted that this man did it.

Our sexy heart throb (I Spy), our Saturday morning pal (Fat Albert), our freakin’ DADDY for God’s sake (Cliff Huxtable)! And he had been in that exalted place in our hearts for, well, so long. And he was taking advantage of people. The. Whole. Time.

All the while being showered with accolades and honorary degrees and lifetime achievement awards.

The Huxtables of The Cosby Show

It’s fascinating to note that this man relied entirely on the fact that women are not, generally speaking, believed. (There are a couple of imbeciles I know personally who still insist the whole thing was a setup.) And how do we justify this institutionalized unbelief?

It’s why most victims don’t come forward. And why so many rapists walk among us undisturbed.

Should we not have heroes?

No. No more heroes.